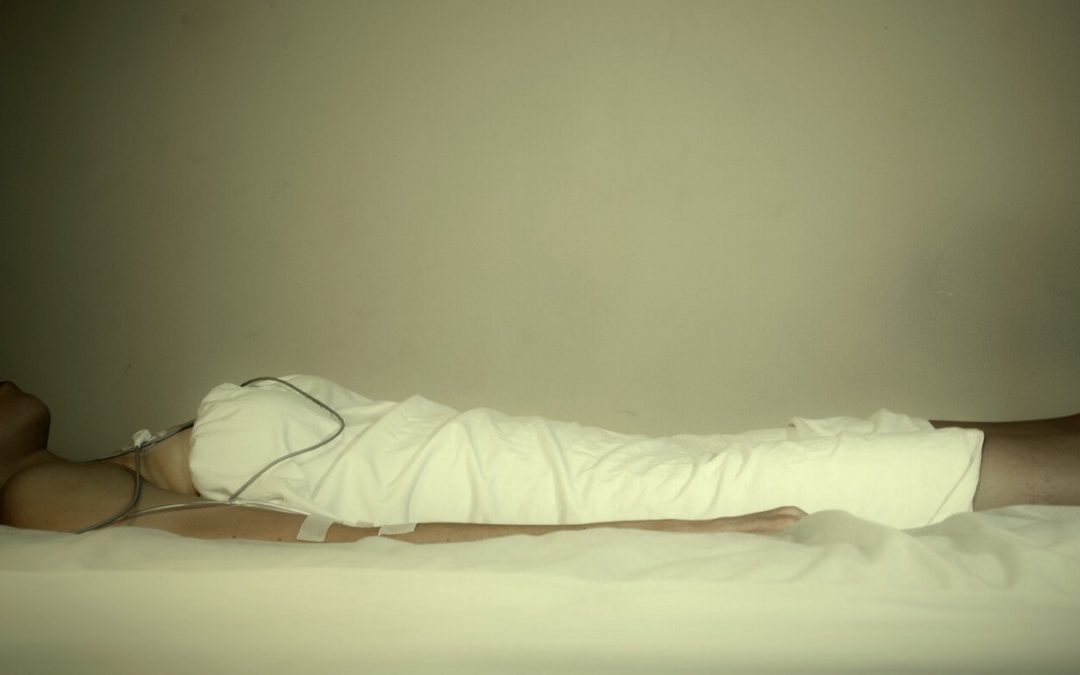 On Friday, February 1, 2019, I had the pleasure to play in Sinking Ship Creations’ latest piece The Mortality Machine.

The Mortality Machine has been a long time in the making. Sinking Ship’s creator, Ryan Hart, successfully crowdfunded the early part of the production process, raising over $16,000 on Kickstarter with 196 backers. The experience is meticulously thought-out, as you can tell by the publicly released design documents. It is built for an audience of between 9 and 20 player characters, and there are 7(+) actors that are part of the unfolding story.

The story’s premise is accessible yet strong: You are playing the families and friends of victims of a secret NYC Chinatown basement medical lab accident. Your loved ones were all desperately seeking a cure for ALS, and signed up for an illegal medical experiment. They disappeared 5 years ago, and are presumed dead. You enter into the scenario looking for evidence and closure about what happened. Ahead of time, you are sent in-world news articles that hint at some of the storyline, as well as introduce characters you’re going to encounter.

If you plan to play the scenario, you should stop reading at this point, because there are spoilers ahead that I discuss necessarily in order to talk about the game dynamics and design choices.

Always the clunkiest part of an immersive production, in my experience, the game’s onboarding does some clever things that bear mentioning.

Foremost, when you arrive, an actor gives you instruction out-of-game about the very simple rules of the encounter (things like; don’t break things, don’t physically assault people, live in the moment and let your character’s emotions guide your decisions). Then, she assigned characters. Interestingly, unlike many other immersive productions, they make no attempts to separate you from your friends or the people you came in with, but rather put you in groupings together. I saw this as a smart design choice, since many times people that enjoy play styles will tend to be friends or partners out-of-game, and know how to dramatize and feed on one another’s acting in-game. Mortality Machine heavily relies on emotion, connection, and dramatization — it is anything but a solo experience, as later game mechanics will reveal.

Each Player Character (PC) was attached to one of the five missing victims. Four of the victims had a good deal of information available about them ahead of time, and one was shrouded in mystery. Character cards on lanyards were given out, each color-coded by victim grouping (ie, green Samantha’s friends/family, purple for Mike’s, etc). The cards had just the right amount of information on them to get a sense of a character while still allowing room for the player to self-insert. You can see the information on these cards here, as the designer has made them publicly viewable. My husband and I came in together, and were assigned roles the husband (Vincent) and the long-lost daughter (Dana) of Samantha Travers.

Next, players were introduced into some classic workshopping elements. In small groups that consisted of players wearing other colored tags, people had the opportunity to speak in-role to answer some questions and get a feel for their character’s voice. Then, groups were changed up into victim-family/friend groupings, and a similar process was followed. Next, the entire group formed a circle and were asked to introduce themselves in-character. This lead naturally to an in-role introduction by an NPC lawyer. The transition from out-of-role to in-role was a little bumpy for the non-roleplayers in the group, but overall worked quite well. I found myself wishing for a visual or auditory cue to signal “Game On”, but it was not strictly necessary and might have confused others.

The story began to unfold as soon as we unsealed the door to the lab. First, players encountered a small puzzle for their loved one in order to get a locker open. These puzzles were very accessible — not meant to be challenging to the degree of any escape room or heavy puzzle-based immersive production. As a puzzler, I was a little bit disappointed that the puzzles weren’t more challenging, and didn’t chain onto more puzzles, but I understand that puzzling was not an important part of this encounter. The immediate puzzle encounter served to put everyone into “figure-it-out” mode. It had benefits and drawbacks. The benefits were that people immediately began to collaborate and share ideas. The drawbacks were that some people immediately now saw this as a “solvable” scenario and were drawn out of their roles and into a desire to cleverly solve or fix the problem, instead of immerse in the emotional experience.

Soon we encountered our first NPC besides the lawyer, a nosy reporter who was there getting a scoop on the story. This was a good choice, it allowed people who were uninterested in the puzzling to have someone to roleplay with besides the lawyer, who was more involved in hinting to any stuck puzzlers and managing the storyline inside the lab. The reporter stayed in the lobby area, while the lawyer stayed in the lab. This was true pretty much all night, and allowed the NPCs to keep an eye on everything happening overall.

Next, the action split into two different parts. People in the lab began to investigate the machine, while people in the lobby encountered a new NPC — a transient man who was jabbering nonsensically and asking for pills and other things. Players in the lab eventually placed someone into the machine, and were frightened when the person then was unrecoverable and seemingly gone. Meanwhile, players in the lobby had traded pills and gotten a laptop computer from the transient, learning of shady dealings to do with the lab’s funding. The transient then offered pills to players, and brave souls took them without hesitation (this is what I chose to do).

Anyone who went into the machine encountered a strangely costumed, maybe fae-like masked creature (called the Psychopomp as revealed in later FAQs), who placed a drop of silver face paint on their faces, spoke cryptically, then sent them into the White Room.

People who took the pills also ended up in the White Room, but came there walking down a dark hallway.

In the White Room stood four of the five missing people. They would interact with the people who had taken pills, responding to their voices and touch, but not responding to the touch or interactions of the people with silver paint. The visual clue was important for actors to be able to react properly, and was a good touch.

From here began a somewhat confusing race to try and find information and figure out what to do. With the large number of players (we had almost a full group), information was not easy to disseminate or discern, and I felt bad for the NPCs being endlessly interrogated by more and more players entering into the liminal and White Room spaces. It was smart to have NPC’s aligned with each player group, so that there could be multiple avenues for player corralling. Clearly, a number of players were trying to solve the mystery, while others seemed content to focus on the emotional content of the stories. I got lucky with my play group — everyone in Samantha’s group that evening were very happy to focus on the character connections and emotional interactions. While tried to awaken Samantha, dancing with her, and speaking in soft tones, we wept. Eventually Samantha became cognizant of our presence and we were able to interact. We were able to bring her out, through the machine, and there encountered the lawyer again, who was shocked to see her, declaring it a miracle.

At this point, it became clear that we were running out of time, but for what, was unclear. The creature NPC had been counting numbers of people within the White Room and without, and saying that balance needed to be reached, but I never interacted with that particular NPC personally because so many players were haranguing them for information that I just didn’t want to add to the pile.

At some point, Vincent decided that he was going to stay in the White Room so that Samantha could leave. I had taken this to be one possible satisfactory ending, until someone mentioned that we might all stay. At this, Samantha seemed intrigued, and I took the cue.

By now, there was a lot of general player confusion. With no clear leader, and no one to disseminate information clearly to a group, it became obvious to me from a design perspective that either some player needed to step up and make a decision, or we would all “lose” the scenario. Communication was key. Listening was necessary. I honestly don’t think that I would have come to this conclusion if I didn’t have years and years of design experience under my belt, but it became immediately clear what the designer had intended:

While purportedly about death, my experience was that The Mortality Machine was, in fact, a story about connection.

It made sense to me that if we leaned into those connections, and all decided to stay, together, that the outcome would be one of the more profound and rewarding.

At this point, I took a little bit of authority and proclaimed that we all needed to go, together, and simply crawled through the machine, leading the way. I had no idea if anyone would follow, but trusted that no matter what they did, I had done what I could.

In the end, that instinct turned out to be a good one, the “Triumphant Ending”. Cast and audience danced together in celebration as the two halves of the final missing character — the transient and the creature, were united and became Michael.

Let me lead by saying, there’s not much to critique, really. The scenario is solid, the acting was good, the experience overall was quite excellent and professionally done. The below critiques are just some small ways I could see to make incremental improvements.

When the night ended we got to have the rare experience of getting to hang out with some of the cast and fellow players at the upstairs karaoke bar, which was a delight. We learned that one of the ‘players’ was in fact a plant, though it never seemed to come up during our run. I’d imagine that that particular actor’s role was to act in the case of a player group that refused to take action on their own, which made sense.

The other player in my playgroup besides my husband had never played a single roleplaying game in her life. I could tell that the experience was mind-blowing to her. (She asked me if I was an actor and I said in general, yes, but not for this production.) She had become entirely immersed in her role and her interactions with us that I was impressed to learn it was her first time. To me, that speaks to the quality of the accessibility of the production to a first-time participant.

Overall, The Mortality Machine was a really excellent production and a mighty step into the world of NYC immersive theater for Sinking Ship. No doubt we will be seeing great things from them in the future.